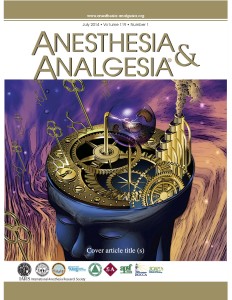 The February issue of Anesthesia & Analgesia has just posted.

Nunnally and colleagues (The Incidence and Risk Factors for Perioperative Cardiac Arrest Observed in the National Anesthesia Clinical Outcomes Registry) found that the incidence of perioperative cardiac arrest was 5.6 per 10,000, based on data collected in the National Anesthesia Clinical Outcomes Registry. As expected, the risk increased with age and ASA status. The incidence of perioperative myocardial infarction was increased in men, an unexpected finding.

The mechanism by which volatile anesthetics cause immobility to noxious stimulation remains a mystery. Wang and colleagues (2-Deoxy-D-Glucose Enhances Anesthetic Effects in Mice) found that 2-Deoxy-d-glucose enhances the anesthetic effects of isoflurane via reduction in energy levels. Venâncio and colleagues (Acute Ketamine Impairs Mitochondrial Function and Promotes Superoxide Dismutase Activity in the Rat Brain) found that ketamine reversed electron flow in mitochondrial complex I.

Data from Lotz and colleagues (Isoflurane Protects the Myocardium Against Ischemic Injury via the Preservation of Mitochondrial Respiration and Its Supramolecular Organization) suggest that the cardioprotective effects of isoflurane result from its stabilizing mitochondrial supramolecular organization. As Eckenhoff and Morgan note in their accompanying editorial (Forward to the Past), many lines of evidence suggest that mitochondrial energetics may mediate some, and perhaps most, of the effects of general anesthetics.

This month’s focus chisels away at an amorphous structure, giving form to what will someday be our comprehension of anesthetic mechanism of action. We have established and reproducible agreements on receptor-ligand interactions of commonly used anesthetic drugs. The articles in this issue of Anesthesia & Analgesia take on a vantage point one order of magnitude in scale above the receptor level and seek to improve our understanding of anesthetic influence on cellular bioenergetics. The surrealism of the cover image was chosen to emphasize not how much we know, but rather how much is left to discover.

« Levetiracetam: a case report where the drug is associated with a global decrease in transcranial electrical motor-evoked potentials » The accuracy of ETCO2 is based on nasal cannula design