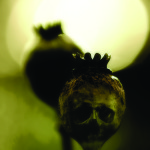 The November issue of Anesthesia & Analgesia has just posted.

The story of Freeman Allen (Freeman Allen: Boston’s Pioneering Physician Anesthetist), one of Boston’s first physician anesthetists, serves as a springboard for discussions on the gratitude of Halifax to the citizens of Boston for assistance in a time of great need (Remembering the Famous and Forgotten in Medicine), and the tragic history of narcotic abuse by physicians, including Dr. Allen.

Schonwald et al. explain the unique risks for narcotic abuse by anesthesiologists, captured by Dr. Nathan’s chilling cover artwork, and our duty to address these risks in the interest of patient care and professional compassion. (Anesthesiologists and Substance Use Disorders)

Candiotti and colleagues (Catechol-O-Methyltransferase Polymorphisms Predict Opioid Consumption in Postoperative Pain) found that two variants of catechol-O-methytransferase (COMT) are associated with variability in consumption of opioids (COMT rs4680) and antiemetics (COMT rs4818).  Jhun and colleagues (Dopamine D3 Receptor Ser9Gly and Catechol-O-Methyltransferase Val158Met Polymorphisms and Acute Pain in Sickle Cell Disease) found that acute pain in sickle cell disease was predicted by the same rs4680 COMT variant, as well as by a polymorphism in the dopamine D3 receptor. As Flood and Clark note in their accompanying editorial (Genetic Variability in the Activity of Monoamines: A Window into the Complexity of Pain) pain is an unusually difficult phenotype to study, combining social and psychological components with multiple biological systems and, for COMT, the protean neurobiology of catecholamines.

Nature has given us the most addictive substances ever realized. Science has endowed us with an understanding of their behavior. And medical training has given us unencumbered access and made us experts in their administration.

Consider the paradox: The same agent that can end the suffering of pain instigates wars and ravages bloodlines and friendships. Our times have born witness to the relentless power of addiction, a force capable of at once disarming the self-control of even the most resolute mind.

Indeed some of civilization’s greatest minds have thrived (and met their demise) in the atmospheric haze of an opium den.

To physicians, opiates masquerade as finely distilled and inconspicuous elixirs, self-contained in made-to-order ampules. But on the cover the unapologetic king of doom appears as he is in his natural habitat. Unadorned save for a crown of petals, he saves all. He enslaves all.

« Drug-induced sleep endoscopy: use of an automated dosing strategy » Proper care of patients who suffer myocardial infarction after vascular surgery