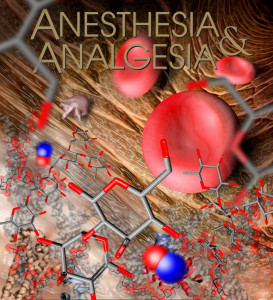 The September 2013 issue of Anesthesia & Analgesia has posted.  What follows are some highlights from the issue.

Hunt and colleagues (“Aromatherapy as Treatment for Postoperative Nausea: A Randomized Trial”) found that inhaling essential oil of ginger or a blend of essential oils significantly reduced the incidence of PONV.

Ruetzler and colleagues (“A Randomized, Double-Blind Comparison of Licorice Versus Sugar-Water Gargle for Prevention of Postoperative Sore Throat and Postextubation Coughing”) found that preoperative gargling with a licorice solution reduced the incidence of postoperative sore throat by 50% compared with gargling sugar-water in patients requiring a double-lumen endotracheal tube.

Anesthesiologists seeking a long-term outcome benefit need look no further than encouraging smoking cessation. In a study of 168 patients, Lee and colleagues (“The Effectiveness of a Perioperative Smoking Cessation Program: A Randomized Clinical Trial”) compared an intervention of counseling, brochures, referral to a smoker’s helpline, and a supply of transdermal nicotine with no intervention. Thirty days after surgery 28% of the patients in the intervention group had stopped smoking compared to 11% of the control patients.

There has been speculation that regional anesthesia might reduce the risk of cancer recurrence compared with general anesthesia in patients undergoing cancer resection. Lacassie and colleagues (“The Relationship Between Neuraxial Anesthesia and Advanced Ovarian Cancer-Related Outcomes in the Chilean Population”) found no benefit from epidural analgesia in recurrence or survival in a population of Chilean patients with advanced ovarian cancer.

Depicted on this month’s cover is the endothelial glycocalyx (“The Endothelial Glycocalyx: Emerging Concepts in Pulmonary Edema and Acute Lung Injury“). The illustrated perspective is unconventional and quite deliberate. It is impossible for the human eye to keep a microscopic object in focus simultaneously with its background. One either loses sight of the forest for the trees or fails to distinguish the trees because of the forest. Beginning in the upper right corner red blood cells course through the all-too-familiar capillary tunnel of endothelial cells. A subtle sheen cast over these cells gradually emerges as a highly complex macromolecular surface structure known as the glycocalyx. A platelet is caught mid-transition into the active state, no doubt interacting with inducible proteins within the protein-studded carbohydrate-based matrix. Two molecules of nitric oxide arise, alluding to the powerful role the glycocalyx plays in inflammatory processes and microvascular disease. For some time now we have cast successively more powerful lenses over the role the endothelial glycocalyx plays in everything from sepsis to fluid dynamics to hemostatic competence. We understand the broader backdrop of circulatory anatomy well. It appears the time has come to appreciate the major functional microcosm hidden in plain sight along this landscape – in other words, to appreciate the trees amidst the forest.

« The Nexfin is an non-invasive monitor of of cardiac output. Does it work? How does it compare to thermodilution measured using a pulmonary artery catheter? » A licorice solution can help prevent postoperative sore throat